Villa Tramonto is located in the Southern part of Umbria, in the area known as the Amerina. Hilltowns were established here by the Etruscans approximately 2,500 years ago, and there is still much evidence of their presence in the area. Guidebooks and maps in English are available at the house, and will provide more information on the many different points of interest in Umbria.

The small town of Guardea is located about 30 minutes east of Orvieto, on the main road through the Amerina Region -- the SS 205. The town itself has a pharmacy, grocery store, several coffee bars, and many little shops where you can purchase fresh pasta, locally grown vegetables, bread, and other necessities. On Sunday mornings an outdoor market is held on Via Roma, just a 1/2 kilometer walk from the house. Village shops are open daily from 9:00 am till 12:30, then reopen after riposo around 4:30 pm; each shop does have a weekly day when they are closed, and that varies.

Sunday tends to be the day when residents gather in the piazza. Before and after mass in the church, families either sit around and catch up or visit the outdoor market. Each afternoon, however, a smaller crowd gathers in the main piazza following the daily riposo.

Situated above the Tiber and overlooking the Tiber Valley, this is the perfect place from which to explore other parts of Umbria. If you’re a nature-lover, there’s a nearby World Wildlife Fund protected bird sanctuary known as the Oasis. On Sundays and holidays you can walk through the paths and from the observation points see swans, herons, egrets, and many other water birds, along with falcons that come down from the hills above Guardea.

There are many walking and hiking trails through the hills that surround Guardea. A map in the town piazza shows trails, as does another map at the edge of town. The Italian Forestry service maintains the paths. The trails are considered safe by the many people who take advantage of them each day, but you can see evidence of the nocturnal animals that roam the same areas. Boar, badgers, foxes and porcupines (the Crested Porcupine can grow to almost three feet long and weigh as much as 60 pounds!) are rarely seen during the daytime, but vipers are occasionally seen sunning themselves on trails or rocks. They are the only venomous snake in the area and are identified by a diamond-shaped pattern on their backs and a triangular-shaped head (hopefully you won’t see any closely enough to identify that!).

There are many kilometers of back roads, along with some well-hidden single-tracks that make for excellent mountain biking. The roads are comprised of dirt, gravel and/or rock and are shared with people who access the mountains for olives, wood gathering and bird hunting, though many people also use them to take daily afternoon walks between small towns. Any roads not labeled “Privata” are rideable and most of the fire roads are viewable in Google maps, so a smartphone is all that you need to find places to ride.

Following soccer, cycling is the sport in Umbria. Many people will be out on Saturdays, but Sunday morning is the typical weekly outing for huge numbers of cyclists. Be on the lookout for cyclists if you’re driving a car and feel confident that Italian drivers are looking out for you if you decide to join the throngs of cyclists.

If you’re accustomed to the pizzas of Southern Italy or the risottos and polentas of the North, Umbria will bring you a different food palette. There’s a strong emphasis on food that is both local and seasonal. Typical Umbrian fare includes many wild meats (boar, deer, rabbit), wild birds (pigeon, pheasant), and many bruschettas with meat-based spreads. There are lots of cured meats -- salamis, prosciutto, and dried sausages -- as well as olives, cheeses, truffles, and nuts. Fresh vegetables and fruits abound and there are markets in most of the small towns and cities where you can buy fresh products. Pastas are also served, accompanied by sauces made of wild boar, truffles, local cheeses and the like.

You’ll find recommendations for a number of local restaurants in the house book, and you’re encouraged to grab a business card from any local eateries you loved and leave them for future guests.

Throughout the year, there are many events both within Guardea and neighboring towns. Sagras and festas, events relating to the harvest of locally found products, are perhaps the most unique. Wine, boar, truffles, chestnuts, olive oil, cheeses and various grains each merit their own celebration. Guardea itself has numerous activities around Christmas (there are 40 nativity scene displays to be found!), New Year’s Eve, Carnival and multiple sagras.

Orvieto hosts the Winter Umbria Jazz Festival, which brings world-renowned artists to small venues in the heart of Orvieto.

In addition to festivals, there are regular flea markets in most towns and some very special, yearly spring markets in places like Amelia (a technology fair) and Tarquinia (two separate and immense markets).

More information can be found in the house book or at internet sites such as this one: www.eventiesagre.it/

From the house you can drive 25 minutes to Orvieto. Famous now for pottery and local wines, Orvieto was known originally as Urbs Vetus by the Romans and also Velzna before the Roman times. The early Etrsucan inhabitants dug caves into the soft tufa stone underneath their city, providing access to water during times when the city was attacked. More than 1,200 of these caves still exist today, and tours provide a glimpse into several. An Etruscan necropolis (cemetery) sits at the bottom of the hill, and remains of an Etruscan temple can be visited. Perhaps most amazing are the remains of tombs which were found in the necropolis, and which are now exhibited in the Museum of the Duomo.

In Medieval and Renaissance times, Orvieto was part of the Papal lands, as was most of Central Italy. Construction on the city’s famous cathedral was started in 1290 and finished largely by the mid-1300s. It is a fantastic example of Renaissance architecture. More information here.

An inclusive ticket which allows access to most of the main points of interest can be purchased at any of the main museums or the Duomo. Simply ask for the Carta Unica. More information can be found at here.

Orvieto is also a great place to buy beautiful pottery and ceramics. The modern art of making ceramics has been going on in this city for hundreds of years, and evidence of a centuries-old kiln was even found in one of the caves under the city, a testament to the long history of pottery-making in this area.

The walled city of Amelia is also just 25 minutes away from the house. Its 2,500 year old walls are some of the best preserved in Italy, and inside the walls is a gem of a town waiting to be discovered. Just inside the Porta Romana you will find the city’s archaeological museum. It has a small but thorough collection of Etruscan, Greek and Roman artifacts that were found in the local area. Like Orvieto, Amelia began life as an Etruscan city. But unlike so many other cities, Amelia wasn’t destroyed by the Romans as they slowly conquered the Italian peninsula. Instead, Amelia became an important stop on the Via Flaminia, one of the roads leading out from Rome. The Archaeological Museum, located in a courtyard next to a small church, covers all of the early history of the town. Of particular pride is a 1st century A.D. statue of the Roman general Germanicus. The statue is bronze and is dedicated to Germanicus, a well-loved general of the early Roman Empire. Information on the statue can be found here and here.

A walk up to the top of Amelia ends at its beautiful cathedral. Like most in this area, it is decorated in the baroque style. Interestingly, the coats of arms of the many of the locals towns are displayed in the cathedral. Next to the cathedral is a 1,000 year old tower. Originally built in the 11th century, when Amelia became a semi-autonomous city-state, its design reuses pieces of marble from earlier times, including a Roman sundial near the bottom. This reuse of existing materials was common, and is evident all over Amelia. As you walk through the town you can see walls where columns, capitals, and marble slabs dating from Roman times are used as newer building materials.

For those with kids, Amelia boasts the nicest playground in the area. Just outside of the Porta Romana is a public park with playground equipment suitable for young and older children. It’s a shady spot where you can sit for awhile, and there are a number of coffee bars right there where you can grab coffee, a pastry, or even some gelato. On the last weekend of the month, Amelia’s monthly antiques market is held in that same piazza. Hours are the last Saturday and Sunday of the month, from 0900 - 1700. It’s a small market where a mix of old, new and junk are sold under the shade of the oaks trees that encircle the park.

Thirty minutes from Villa Tramonto is the Parco dei Mostri, or Park of the Monsters. Don’t be alarmed though — the 'monsters' are enormous stone statues which are all over the park. A walking path takes you past Hercules, Neptune, Ceres, Isis, and other gods and goddess from the Greeks and Romans. There are also creatures, both mythical and real, such as an elephant and turtle, dragon and mermaid, and even a couple of huge monsters.

Built in the 1500s by a wealthy nobleman, it’s a whimsical and wonderful place for kids and adults, with shaded paths, streams and waterfalls, a picnic area and a little playground. Information on hours can be found here.

Approximate times/distances to other points of interest 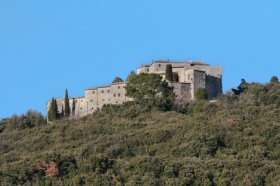